In today’s competitive world, how young people present themselves is vitally important in school, socially and at university. Those who learn presentation skills early in their lives have a great advantage. Competition for university places is increasing and it is getting more difficult for young people to get jobs. LAMDA exams do not involve writing, but teach vitally important life skills such as public speaking, presentation technique, voice projection and clear diction. These skills are taught through the fun, creative disciplines of, for example, Verse and Prose and Solo and Duologue Acting. These life skills are invaluable and build tremendous confidence, regardless of which career path a young person takes.

The London Academy of Music and Dramatic Art (LAMDA) is the oldest Drama School in the UK. It has provided the world of theatre, film and television with many first-class actors and stage managers. LAMDA began offering speech exams to the public in the 1880s and are the largest drama examining board in the UK. They have developed a comprehensive system of performance evaluation, adjudicated by experts in education and acting. The Qualifications and Curriculum Authority now recognize LAMDA and from Grade 6 onwards, young people can earn valuable UCAS points for university (see section in this website).

Devon Drama is a small company providing drama services to schools and to young people privately. Lucia Fausset BA (HONS) PGCE and Gerald Cox Dip Performing Arts RSA Dip TEFL MCSE are both professionally trained actors and teachers with a great deal of experience teaching drama, directing shows, voice coaching and preparing young people for LAMDA exams. We create a supportive environment in which young people can explore their dramatic creativity and have a lot of fun, but at the same time learn vital life skills.

What Makes a Successful Young Communicator?

How do you become good at getting up and speaking in front of your class or even the school? In other words how do you become a confident public speaker? What is a ‘good’ presentation?

What do you think about the research in the graphic below? How can a mixture of how you move and how you sound make up 93% of the success of a presentation? 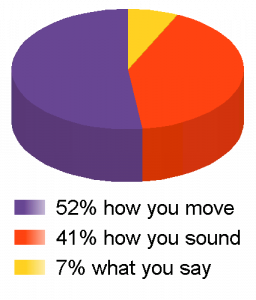 All young people have to learn how to get up and speak in front of people and yet, even for most adults, this is frightening. We usually think that what we say is all-important! The research in the graph above shows that it is how we move and how we sound that communicate the most. For example, we communicate with our posture, the way we use our eyes, hands and arms, how we breath and the sound we make. Eyes that are unfocused, poor posture, hands and arms we can not control, running out of breath – all of these things communicate a message and feeling to the people we are speaking to, which can be entirely opposite to the one we want to give!